I love Pavement kind of a lot but I like it less at 10:30pm on a weeknight when I'm sick and it's on a stereo outside my bedroom door. Punctuated with the clatter of pots and pans and off-key singing along, no less.

I just went to the corner store to buy a six pack. I got to the register and checked to see if I had anything smaller than a $20 bill with which to pay, realized I didn't, and handed the cashier my $20. He asked if I could "spare any of those." Assuming he meant my beer (it's not a particularly busy corner mart, and the cashier is young), I smiled and responded "I can if it'll make your night easier." He nodded, and I pulled a beer out and pushed it across the counter toward him. He looked faintly horrified and said he meant the dollar bills I'd pulled out. I nodded with embarrassment, put the beer back, traded him five ones for a $5, and left.

Clearly I have been living on Capitol Hill far too long, where it is infinitely more likely someone will ask for a beer than change for a $5.

I don't want to forget the recap.

magnolienbaum was in town from NYC for his roomie's show at the Crocodile. We walked in the sunshine down to Mama's for dinner, then Shorty's for a drink, and then onto the Croc for the show. It was fabulous to see him and catch up and it turns out his roommate's band is AMAZING. Totally glad I picked up their CD. I also ran into an old acquaintance at the show and enjoyed playing catch-up with her.

Friday: Dinner at Mama's, drinks at Shorty's. Again. This time for Erin C.'s birthday. It was... interesting. I was actually vaguely foul-tempered about it at the start, but worried it would look weird if I just bailed mid-meal; I ended up having somewhat better of a time, gossiping with the girls and whatnot. And I do so love Shorty's.

Saturday: Dinner party at Maureen's. Her apartment is incredible. Box beams, crown molding AND wainscoting. I could die. And she's a good cook, too! We didn't stay too late; I was home by 11. I was supposed to go out to meet an old friend who was in town from Chicago but he and his pals kept going to bars I hate so I never did make it back out.

Sunday: Woke up bright and early thanks to staying in the night before. Made breakfast then hopped a bus to the U District for the Street Fair. Met up with Annie on the bus, and Aaron and Patty once we arrived. Ran into Maggie Roberts who instantly made me feel about 10 times better about going back to school and figuring my shit out. God, I have SO much to thank that woman for. Also finally ended up running into Jay Baldridge; he met up with us at Kai's and we did photos and hugs and gossip, which was fun. Kip also met us there; he was looking handsome. The St.Js and I then headed back to Ballard to bbq. We played a fantastic game of Wisest Wizard (Peter's was as tall as he is) and the ladies who were playing even did a boss fight. I need to remember to stop pretending like weeknights are weekends because Monday was ouchy.

Oh, and we won first place at trivia on Tuesday for the first time in a zillion years! That was unexpected and awesome. And last night, I went to trivia at Georgetown Liquor Company. It was a little too low-key for my taste but I might be kind of in love with the bar, generally speaking.

I really did Tuesday right. Trivia, the Los Campesinos! show while bonding with Kippy, more trivia, and singing my two favorite karaoke songs (Love Shack with Aaron, and Lisa Loeb's "Stay") at the Crescent. I just hope the rest of the week can compete.

Here's something I can't say in 140 characters or less: I like my city. I like my family here, and my home, and my neighborhood. I love running into people on the street and I love recognizing all the characters between home and work and the places I go to socialize.

Seattle is a damned fine town. I'll never argue that the "freeze" isn't real, or that it's easy to meet people here, but I will say that people are kind and genuine once you've got an in to break through the ice.

This message is brought to you by Vitamin D!

One weird side effect of staying home with a fever for three days: Fever dreams! I've been watching a ton of movies, including movies featuring armed forces, and I keep having dreams that I'm a really inept soldier and I can't save the people I'm trying to save.

And then I wake up and it's time for my next dose of aspirin so I can have four more fever-free hours. 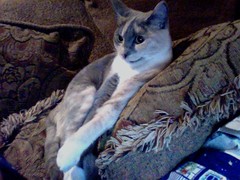 The cat has learned to fake-smile
Originally uploaded by girlstyle
Moxie has been living with my parents for a month now. She has learned to operate doorknobs and to smile vaguely. Though I left her trimmers here, they haven't clipped her talons (she was overdue when she arrived). I got (I think) seven of her front ten tonight. I have seven gouges in my right hand now, too, which is not actually a coincidence. But she's sitting with me and purring which means I'm totally sitting here in my Christmas pajamas (there's snow and stars and a little town and Santa's sleigh on them) staring at her and shouting "You're a kitty!". Fucking cats.

I've been reading the serialization of Cory Doctorow's Makers for a while now but decided to cheat this evening and download the full novel so I could find out what happened. I'm almost done; these lines are from the epilogue and I'm not quite sure why they struck me how they did but they rivet me.

They were like gears that had once emerged from a mill with perfectly precise teeth, gears that could mesh and spin against each other, transferring energy.

They were like gears that had been ill-used in machines, apart from each other, until their precise teeth had chipped and bent, so that they no longer meshed.

They were like gears, connected to one another and mismatched, clunking and skipping, but running still, running still.

I don't know what's going on with my poor keyboard but it's been doubling up my "M"s since yesterday. The "K" is being kind of wonky, too. Bah. I can't wait until I get my year-end bonus so I can replace my poor tired laptop. Anyway, just ignore any errant or duplicated Ms and Ks you might see.

Friday: Went to Le Faux at Julia's with Caryn. It was way better than I thought it would be. The costumes were and performances were lively and the emcee was great with a crowd. We went to the Crescent afterward and hung out with Peter and Hillary until 2 and then got invited over to hang out with Jake for a small afterparty. It was really pleasant. I kind of just want to leave all the extraneous "K"s in this post from here on out so you know what I'm dealing with. It's like kkcomically kbad.kkkkkkkkkkkk Anyway, Moxie scared Caryn off k by being vigorously nocturnal and generally a pain in the ass, but I'm hoping to have the opportunity to make up for it kat some point this week or kkkkkkkkkkkkkkkkkkkkkkkkkkkkkkkkkkkkkkkkkkkkkkkkkkkkkkkkkkkkk so.kkk. kkkk

Saturday I slept in extravagantly due to staying up so late the night before. I met Ella for kdinner and drinks kkkkkkkkkkkklater though; it had been months since we'd hung out and it was nice to catch up. We ran into Josh and Twozdai at the Saint and kended the night chatting with them about things and stuff, kincluding sweet kkkkktheoretical raincoats.kkkkkkkkkkkkkkkk

Sunday I met Strand and some of his friends for his 2 year anniversary of living in Seattle. Ashley came out to join the party and we turned it into a pub crawl, hitting Cafe Met, Captain Blacks, and the Stumbling MMonk after the Elysikan. It was a really nice kafternoon.

Now it's Monday and I'mm hoping to get to sleep even earlier than my usual old lady bedtime so I can go to the gym tomorrow before work. Heaven only knows what commpels me to get up extra super early on Tuesdays lately; it's the only weeknight I kkkkkstay out late and I just end up getting sleepy midway through trivia with all this waking up at 5:30am. Oh, well.

I went out tonight for Katie's doctoral inauguration/celebration. I hung out with people from the internet and it was good.

I always knew the 96 pack of crayons I've owned since 2005 would come to a good end. They actually came to an awesome end and I only wish I'd photographed every single page of Katie's "You're Awesome" workbook.

Congratulations to Dr. Katie and huzzah for defenses, crayons, and nice people.
Collapse